Creating Food and Homes for the Ocean's Homeless.

Globally, coral reefs are dying at unprecedented rates, leaving marine species and coastal communities without food or storm protection. Reefs continue to degrade because we continue to take too much fish, and leave behind pollution and excess nutrients. On coral reefs, the effects of these issues are made worse by rising carbon emissions, which are making our oceans warmer and more acidic every year. Artificial reefs are being deployed around the world in an attempt to build back underwater habitats that have been lost or severely degraded.

Natural reefs around the world are overfished and have lost the three-dimensional structure that is slowly built by coral as they grow their skeletons.

IntelliReefs (a division of the company Reef Life Restoration, LLC) has developed and tested an unprecedented nanotechnology substrate that can be cast in any design and scaled up larger than any competing restoration substrate on the market. Twenty years of research and development have yielded Oceanite— proprietary, unique mineral mixture that allow artificial reefs to be fine-tuned and customized down to the nanoscale to support site, species, and function specific conservation goals.

What Are Artificial Reefs?

Artificial reefs are man-made underwater structures that mimic some of the natural qualities that hard-bottomed ecosystems have in the ocean. They provide three-dimensional structure, food and shelter for fish and invertebrate populations, and have been found to act as a biofilter and enhance biodiversity.

When reefs deteriorate due to climate change, warming, and acidification, they erode faster than corals can build back their calcium carbonate skeletons. Eventually, this causes a loss of the three-dimensional structure that houses the amazing biodiversity of animals that live on coral reefs. Conservation organizations have adopted artificial reefs as a restoration strategy with the hopes of revitalizing fish populations, creating additional hard substrate for corals to settle, and as a tourist attraction to deter divers and snorkelers from natural reefs.

Around the world, artificial reefs have a myriad of different shapes, many of which are a result of the inability to invest in bio-promoting and durable materials. The result is that most of these structures are made from ad hoc, cheap materials. From sunken ships and decommissioned army vehicles to specifically engineered conservation structures, artificial reefs are peppered throughout the world's reefs and other marine ecosystems.

Coral reef community beginning to form on a decommissioned army vehicle in a marine desert.

In recent years, marine restoration companies have been racing against climate change to create innovative solutions to halt and mitigate coral deterioration. While many designs and substrates exist on the market, most fall woefully short of reaching their conservation goals in four main categories: scalability, durability, bio-promotion, and cost.

Close up of the biodiverse marine life on Caribbean IntelliReefs, including vibrant purple sponges and crustose coralline algae.

After conducting fieldwork in the Caribbean, IntelliReefs' scientists have determined the benefits of Oceanite and IntelliReefs artificial reef systems:

After only 14 months of deployment, IntelliReefs' scientists found higher biodiversity on the structures when compared to nearby natural reefs. The pilot structures are home to a vibrant fish community that feeds on the marine plants and animals that grow directly on the Oceanite. Fish were observed resting directly on and sheltering within the IntelliReefs. Read full scientific report on Sint Maarten IntelliReefs project here.

Healthy, wild coral spawn are already settled and growing on IntelliReefs deployed near natural reefs. Oceanite has a complex matrix of pores that increase the surface area for animals to settle and allow for small animals like new coral recruits to survive predators in the early stages of life. IntelliReefs has several proprietary Oceanite growth matrices that are designed down to the nanoscale to attract and foster healthy coral growth, targeting imperatives for increased coral restoration.

Researchers found that the IntelliReefs structures in our Sint Maarten test sites were nearly 100% covered with highly diverse marine life. The porous nature of Oceanite facilitates the settlement of animals on the surface of the structures and deep within the mineral matrix itself, mimicking a living reef substrate where animals burrow and live in crevices and beneath the surface of coral skeletons and natural rocks.

Sponges, worms, bivalves, and other invertebrates cover IntelliReefs, feeding fish and filtering water on the reefs.

Oceanite mixtures are also made specifically to withstand harsh marine conditions, and have remained unchanged through their first hurricane season in the Caribbean. Finally, IntelliReefs teams has a 20-year history of engineering, manufacturing, and casting large, intricately-designed structures, and have the technical ability to produce Oceanite structures on an ecologically relevant scale - hundreds of metres to kilometres long. These benefits combine to make IntelliReefs the best option for ecological and economic return from restoration projects using artificial coral reefs.

A large-scale, wave break IntelliReefs design made from Oceanite.

In the global artificial reef market, scalability, durability, bio-promotion, and cost have limited their success for conservation of coral reefs. Solutions that are complex and require a high amount of engineering, such as 3D printing, are too expensive to address coral decline on a regional scale. Additionally, the binding agents used in 3D printing are harmful and can be toxic to marine life. Many of these small, intricate solutions also cannot withstand harsh marine conditions on meaningful ecological time scales. Corals grow over decades and centuries on natural substrates, but many structures made from metal, traditional concrete, and ceramic would be unable to support corals for the entire duration of their lives.

IntelliReefs are designed to enable precision control of pH values, surface chemistry, and texture to attract target marine species and enhance the growth of calcareous organisms, such as crustose coralline algae (CCA), shellfish, and corals. Portland cement has an approximate pH of about 12 and has been observed to irritate and even burn animal’s tissues. Oceanite mixtures can currently attain a pH of 8.1 – roughly the same as the surrounding seawater. This prevents injury and irritation to marine life and promotes rapid, long-term, and healthy growth, as shown in the photographs below. 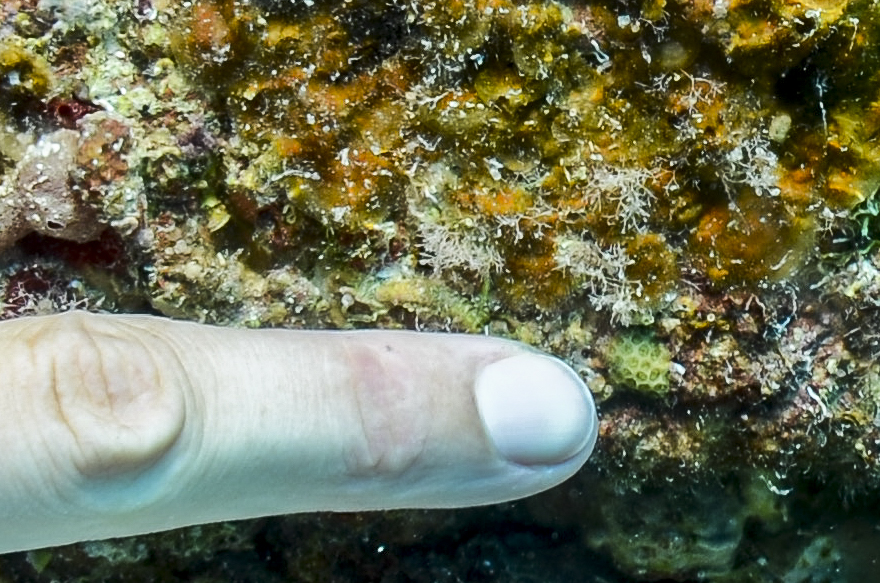 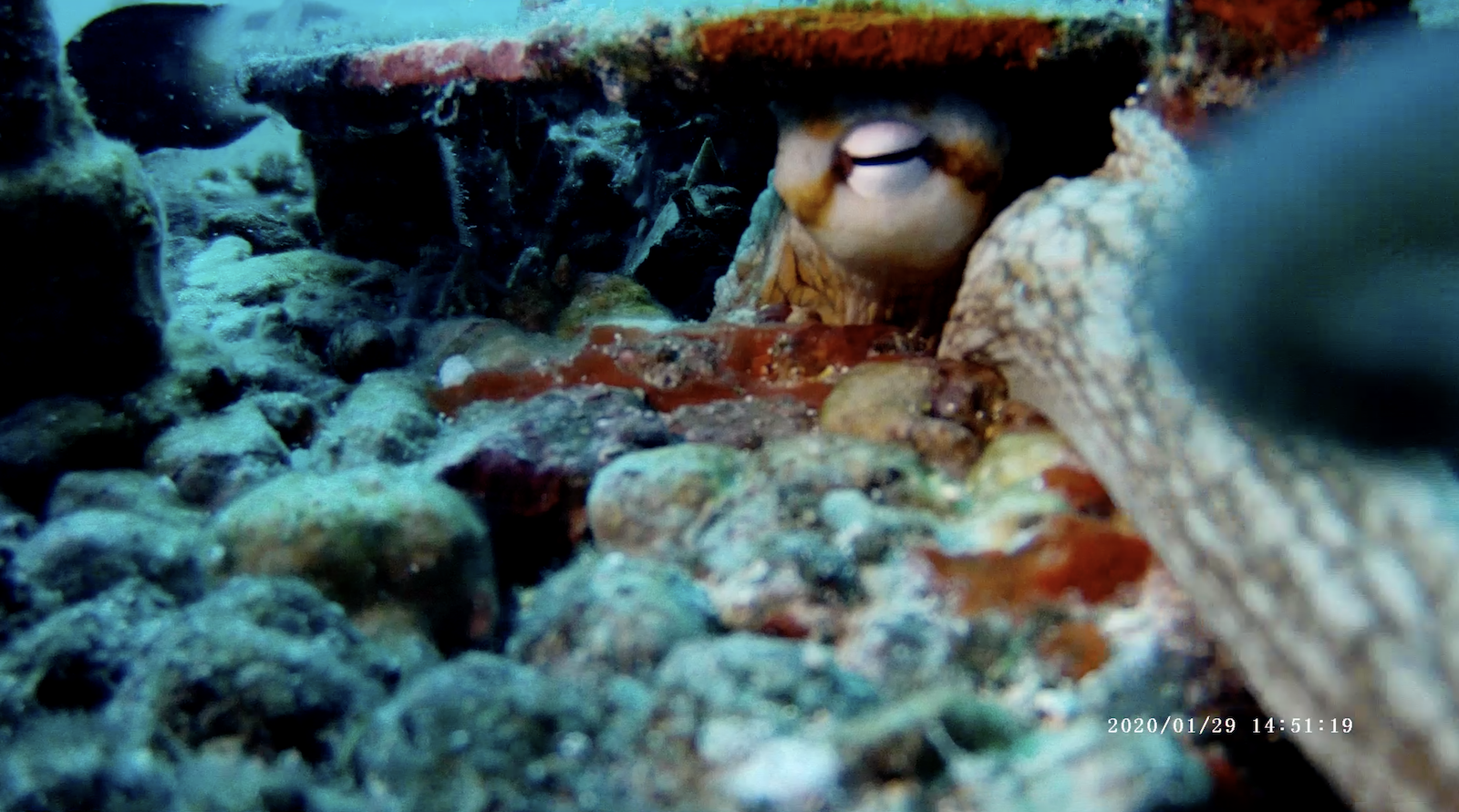 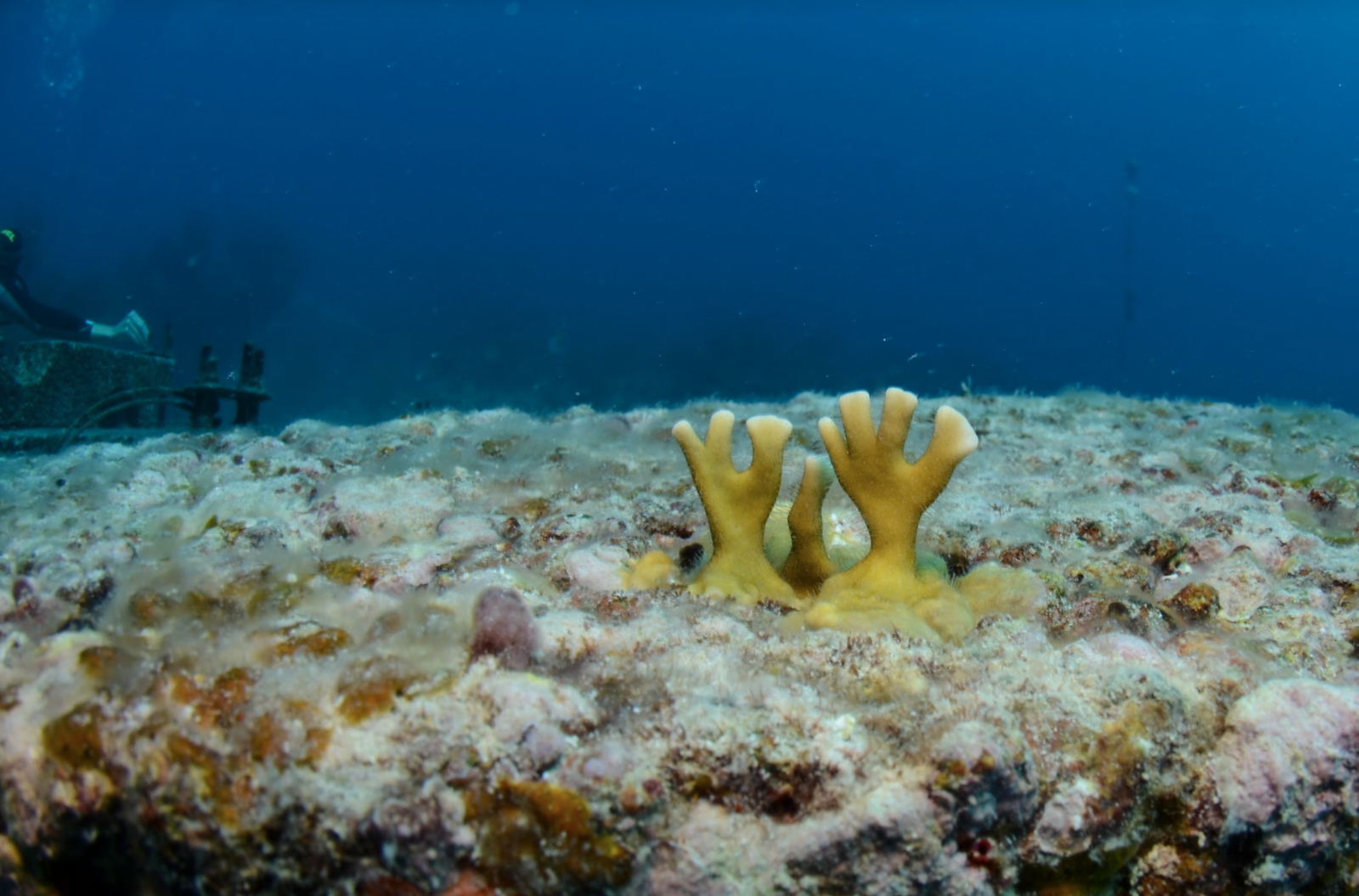 As a result, short-term, small, unnatural, and toxic substrates underwater are unlikely to achieve their conservation goals. Coral ecologist Emily Higgins and her colleagues summarized the main limitations for man-made coral reefs as a conservation strategy in 2019 (Read Chapter 2 of thesis here) in an attempt to address the increased use and deployment of structures. The researchers found that artificial reefs globally are too small to address regional conservation goals, such as increasing fish biomass, coral cover, and biodiversity.

IntelliReefs are currently the only restoration solution on the market that creates bio-enhancing substrates that mimic natural reef development and foster growth on a large scale over a very short amount of time. The race against climate change and reef degradation calls for a scalable, natural solution to ensure that limited resources are spent on solutions that will produce results and achieve global conservation targets for reefs.

Written by Emily Higgins, IntelliReefs Director of Science and Communication